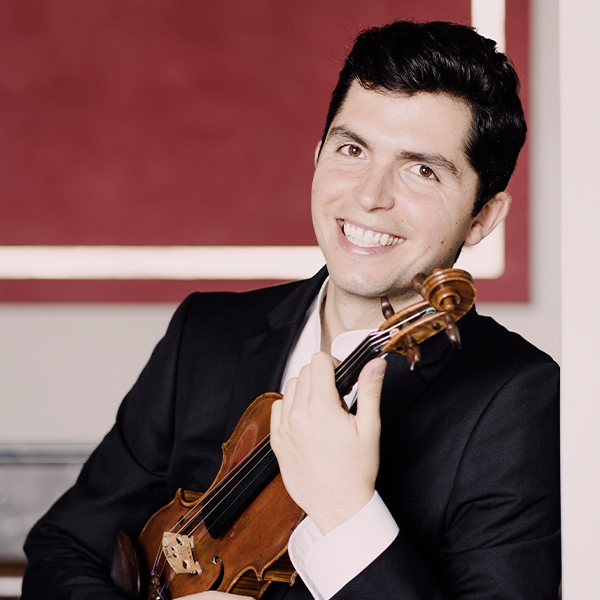 Violinist Ryan Meehan has been hailed for his “singing tone” (New York Times) and his “remarkably polished and sophisticated playing” (Chicago Tribune). As a member of the Calidore String Quartet he is a recipient of an Avery Fisher Career Grant, a Borletti-Buitoni Trust Fellowship, Lincoln Center Emerging Artist Award, BBC Radio 3 New Generation Artist and is a member of the Chamber Music Society of Lincoln Center. Ryan regularly performs in venues such as Carnegie Hall, Lincoln Center, Wigmore Hall, Berlin Konzerthaus, Cologne Philharmonie, Seoul’s Kumho Arts Hall and at festivals, including the BBC Proms, Verbier, Ravinia, Mostly Mozart, Music@Menlo and Mecklenburg-Vorpommern. With the Calidore, he has released six commercial recordings.

As a soloist, Ryan has garnered top prizes in competitions, including the Washington International Competition (also winner of the audience prize), ASTA National Solo Competition, Artists’ Series of Sarasota, Pasadena Showcase for the Arts Instrumental Competition and NFAA Young Arts. He has performed as soloist with the Colburn Orchestra and played recitals throughout the United States and Europe. As a chamber musician, he won grand prizes at the M-Prize, Coleman, Chesapeake, St. Paul and Rembrandt chamber music competitions, as well as prizes at the ARD Munich, Hamburg and Fischoff competitions. He has collaborated with such esteemed musicians as Menahem Pressler, Jean-Yves Thibaudet, Paul Watkins, Lawrence Power and members of the Emerson, St. Lawrence and Ebène String Quartets.

In 2021, Ryan was appointed to the faculty of the University of Delaware School of Music as Associate Professor of Violin and co-directs the UD Fellowship Quartet Program. Previously, he served as artist-in-residence at the University of Toronto and University of Michigan. In response to the 2020 summer festival cancellations caused by the Covid-19 epidemic, Ryan co-founded the Virtuosi Virtual Summer Academy (VVSA), which connected a diverse group of forty young violinists and pianists with some of the world’s leading soloists, chamber and orchestral musicians. Ryan’s violin students have been accepted to prestigious musical institutions, such as the Colburn School, Indiana University, Hochschule für Musik in Munich and won prizes in numerous national competitions. He is a graduate of the Colburn School Conservatory of Music in Los Angeles. His teachers include Almita and Roland Vamos, Robert Lipsett, Arnold Steinhardt, Julia Fischer and Amy Schwartz Moretti.