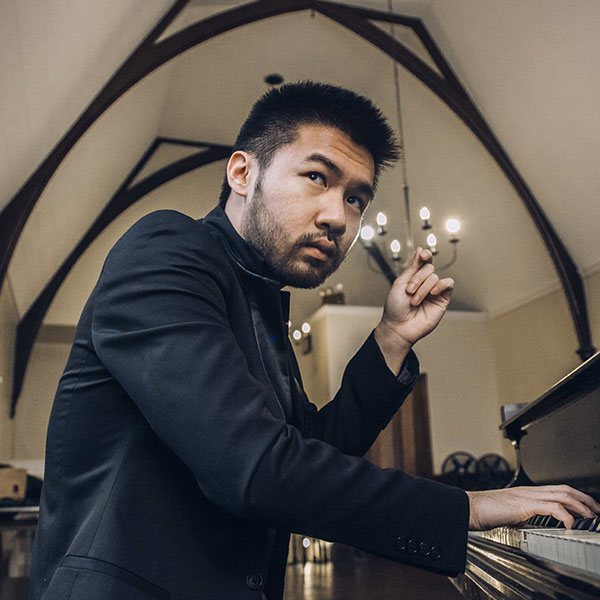 Conrad Tao has appeared worldwide as a pianist and composer, and has been dubbed a musician of "probing intellect and open-hearted vision" by The New York Times, who also cited him "one of five classical music faces to watch" in the 2018-19 season. Tao is a recipient of the prestigious Avery Fisher Career Grant, and was named a Gilmore Young Artist—an honor awarded every two years highlighting the most promising American pianists of the new generation. At the 2019 New York Dance and Performance Award ("Bessies"), Tao was the recipient of the award for Outstanding Sound Design / Music Composition, for his work on More Forever, his collaboration with Caleb Teicher.

Tao's 2018-19 season began with the New York Philharmonic's world premiere of their commission Everything Must Go, and the inaugural concert of their curated late-night concert series Nightcap. He also made his LA Opera debut in the West Coast premiere of David Lang's adaptation of Thomas Bernhard's the loser, and made his Los Angeles Philharmonic debut performing Beethoven's Piano Concerto No. 1, alongside summer debuts with The Cleveland Orchestra, New York Philharmonic, and Boston Symphony. In Europe he was presented by the Swedish Radio Symphony in recital and in Andrew Norman's Suspend alongside Susanna Mälkki; he also returned to the Orchestra dell'Accademia Nazionale di Santa Cecilia, performing with Antonio Pappano.

In the 2019-20 season, Tao will be presented in recital by Carnegie Hall, performing works by David Lang, Bach, Julia Wolfe, Jason Eckhardt, Carter, Rachmaninoff, and Schumann. He will also make his debut in recital at Walt Disney Hall, where the LA Phil will present him in works by Copland and Frederic Rzewski. Following his debut at Blossom, The Cleveland Orchestra will present Tao in Severance Hall in a special program featuring music by Mary Lou Williams and Ligeti, and improvisation alongside pianist Aaron Diehl. Concerto highlights in the upcoming season include performances of his own work for piano & orchestra, The Oneiroi in New York, with the Seattle Symphony, as well as performances with the Baltimore, Charlotte, and Pacific Symphonies. He will also perform The Oneiroi alongside Galina Ustvolskaya's Piano Concerto with the Phoenix Symphony. In March 2020, Tao's piece Everything Must Go will receive its European premiere with the Antwerp Symphony Orchestra and conductor Edo de Waart.

In addition to concert halls, he will also tour to college campuses, including the University of Notre Dame, UC Berkeley, Humboldt State University, Oregon State University, and Princeton University. Tao's acclaimed evening-length collaboration with choreographer Caleb Teicher, More Forever, will be presented by Celebrity Series of Boston, and will make its west coast premiere at Segerstrom Hall in Orange County, CA. His ongoing electroacoustic collaboration with improviser and vocalist Charmaine Lee continues with an opening-night performance at the 2019 Resonant Bodies Festival in New York. In the spring, Tao will tour with the Junction Trio — his ensemble with violinist Stefan Jackiw and cellist Jay Campbell — to Massachusetts, Washington D.C., Ohio, Texas, and New Mexico. He will also celebrate Stephen Sondheim's 90th birthday at the 92Y with Anthony de Mare, premiering a new two-piano take on "Move On," from Sunday in the Park with George.

As a curator and producer, Tao presented the UNPLAY Festival in June 2013 at the powerHouse Arena in Brooklyn. The festival, hailed by The New York Times for its "clever organization" and "endlessly engaging" performances, featured Tao with guest artists performing a wide variety of new works. Across three nights encompassing electroacoustic music, performance art, youth ensembles, and much more, UNPLAY explored the fleeting ephemera of the Internet, the notion of canonization in the 21st century, and the role music plays in social activism and critique.

A Warner Classics recording artist, Tao's debut disc Voyages was declared a "spiky debut" by The New Yorker's Alex Ross. Of the album, NPR wrote: "Tao proves himself to be a musician of deep intellectual and emotional means – as the thoughtful programming on this album…proclaims." His next album, Pictures, with works by David Lang, Toru Takemitsu, Elliott Carter, Mussorgsky, and Tao himself, was hailed by The New York Times as "a fascinating album [by] a thoughtful artist and dynamic performer…played with enormous imagination, color and command." His latest album, American Rage, was released to acclaim in Fall 2019 and features works by Julia Wolfe, Frederic Rzewski and Aaron Copland. Conrad's creative process behind the album was highlighted as part of a November 2019 profile in The New York Times.

Tao was born in Urbana, Illinois, in 1994. He has studied piano with Emilio del Rosario in Chicago and Yoheved Kaplinsky in New York, and composition with Christopher Theofanidis.