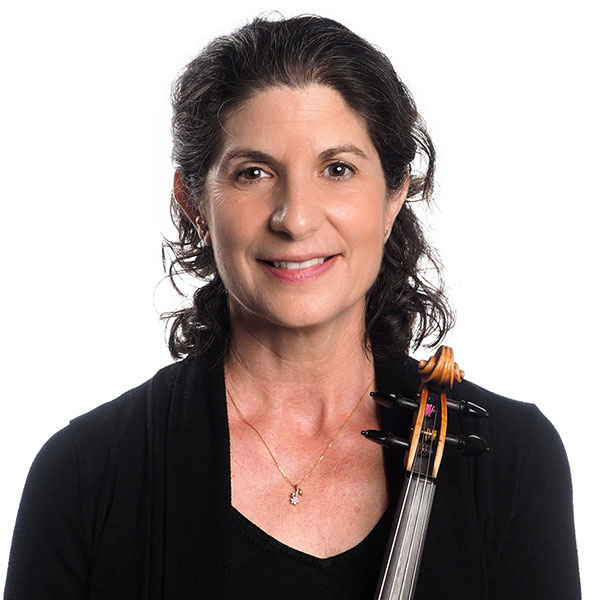 Instrument: Roxane plays a violin of unknown origin. It is estimated to be made around 1865 and possibly a conglomerate of a variety of instruments, scraps you could say of English and Eastern European origin.  The neck is unusually narrow and the scroll is much worn.

Roxane's bow is believed to by James Tubbs, the most important British bow maker, made around the turn of the 20th century. She loves this bow. It helps her to produce a creamy, darker sound on her violin and can do any stroke. Roxane noted that she has to be careful not to push it too much - it doesn't like to be bossed around!

Biography:
Roxane Frangie Solowey moved around a lot early in my life - a result of her father being a career Army man who worked in a variety of white collar jobs after discharge. Roxane's parents are both of Lebanese origin so the culture and the food were important parts of her life growing up and still are. The bulk of her childhood was spent in Indiana. From there she gradually moved eastward, meeting her husband Larry Solowey, co-principal horn in the Sarasota Orchestra, in New Hampshire at a chamber music festival and finally landing in Boston after school, working at Harvard Medical School, before "going on the road" in the US and abroad with Broadway shows. A few years later, Larry won the job here and Roxane joined him in 1992. The two married in 1994, had two sons, Michael, in 1997 and Daniel in 2000.  What they originally thought would be a two year stop has turned into home. Roxane is so grateful for all that Sarasota has given her and her family – Roxane's mother, brother, and father-in-law live here too!

Career Highlights:
In her many musical experiences, Roxane has found that there have been moments, some long, some fleeting, that have all been memorable and wonderful. The recipe for a career highlight always has a period of time when everyone is in the same space at the same time - in "the zone" you could say.  It's a magical experience that she has felt with her quartet, the orchestra, a teacher, with students, and with audiences. It is a feeling of joy and connection between musician and music that is entirely unpredictable. The most interesting is when it includes the audience. Like the acoustics of a performing space, an engaged audience can have a big impact on a performance that makes it truly memorable.