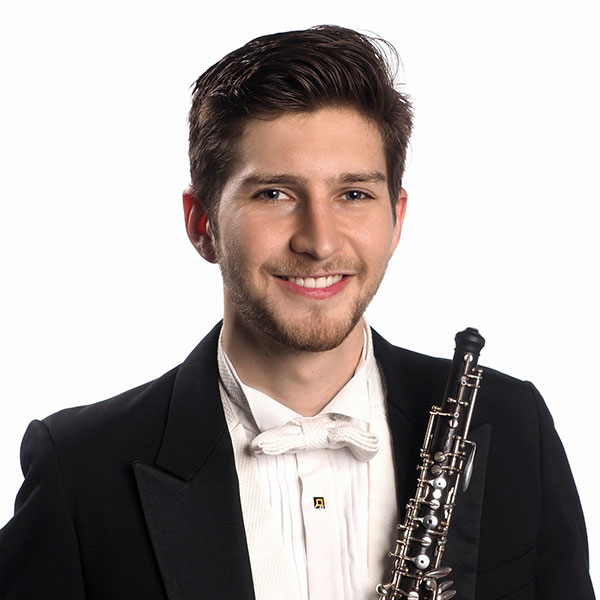 Instrument: Jonathan plays on an oboe by the F. Lorée- a famed company that has specialized in oboe-making since 1881. The model he plays on is actually based off of an old "B-series" model that was in production in the mid-20th century. It was played on by the likes of world renowned oboists at the time and currently by my former teacher, John Ferrillo of the Boston Symphony Orchestra. His specific instrument actually came from the closet of his former teacher, John Mack! These specifications were studied and used to recreate new instruments, which are now available through instrument dealers in the U.S.

When asked about the oboe's role in the orchestra, Jonathan said, "The oboe is a very unique instrument, both in the sound it produces and in what it requires of the person playing it. Often featured as a solo voice in the orchestra, its distinct and penetrating timbre is typically used by composers to carry a melody. It is also used to tune the orchestra with an "A" that sounds the beginning of every orchestra concert.

The sound of the instrument originates from the double reed itself, which must be made by the oboist. The process starts with tube cane (which looks like bamboo), which must be sorted and then processed through a gouging machine until it is thin enough to fold. From there is it shaped and then tied onto a staple (the piece that fits into the oboe) and then scraped with a knife until it is thin enough to vibrate. How much cane is removed and where is a matter of expertise- in fact, one must master all steps of the reed making process in order to consistently make good reeds, and thus, to be a great oboist."

Biography:
Jonathan Gentry joins the Sarasota Orchestra this season as principal oboe, and was formerly principal oboe of the Louisiana Philharmonic Orchestra. He has also performed with the Fort Worth, San Diego, and San Antonio Symphonies.
An avid performer in many mediums, Jonathan is equally at home both as a soloist and as a chamber musician. As a soloist, he most recently performed the Haydn Sinfonia Concertante with the National Repertory Orchestra. Other concerto appearances include the Vaughan-Williams Concerto with the East Texas Symphony, Pasculli's "La Favorita" Concerto with the Brazos Valley Symphony, and the Mozart Concerto with the Plano Symphony and the Boston Philharmonic Youth Orchestra. As a chamber musician, he was a founding member of Tangent Winds, a prize-winning wind quintet in the 2018 Fischoff Competition. Festival highlights include appearances at the Verbier Festival, National Repertory Orchestra, Music Academy of the West, and the Aspen Music Festival.

Passions/Interests:
Jonathan passionately enjoys many interests outside of classical music. A lifelong pursuit of his is creating the perfect cup of coffee – he loves trying different beans from around the world and exploring all of the nuances in brewing that can bring out the most subtle flavors. Jonathan also enjoys traveling and amateur photography: two hobbies that often go hand-in-hand. Lastly, he is a HUGE basketball fan. When he's not watching NBA games during the season, you can find him out on the court trying to work on his three-point shot.

Career Highlights:
One of Jonathan's fondest musical moments is performing the Poulenc Trio during his first week in Sarasota and days later reading a review of the concert in the Herald Tribune that gave the trio the most wonderful praise. Jonathan recalls, "It was a truly special feeling to be so warmly welcomed to the orchestra."