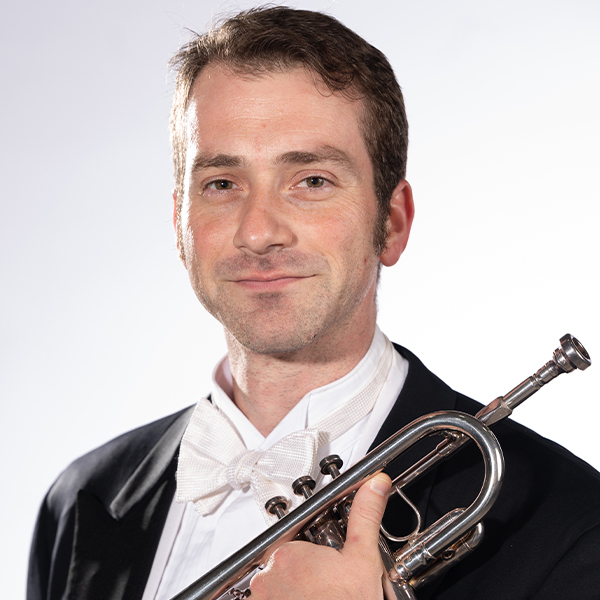 Chamber music has always held a special place in Aaron's heart; he performs with his parents Ronald and Avis Romm in The Romm Family Trio, an internationally recognized two-trumpet-and-piano ensemble that regularly receives standing ovations for their family-oriented concerts.  Most recently Aaron conducted masterclasses and performed with The Romm Family Trio as part of the International Belgian Brass Academy (Harelbeke, Belgium), the Pierre Badel International Academy (Paris, France), and the International Trumpet Guild Regional Event at the University of Indianapolis.  Aaron regularly performs solo recitals, and has appeared as a soloist with the Peoria Symphony Orchestra, Baroque Artists of Champaign-Urbana, and most recently, Manatee Community Concert Band, to name a few.   As part of his educational clinics, and frequently performs solos with high school bands and orchestras.

Dr. Romm currently lives in Sarasota, Florida, and is proud to serve as Adjunct Instructor of Trumpet at State College of Florida, Manatee-Sarasota.  Prior to his move to Florida, he taught at Illinois State University and the Conservatory of Central Illinois.

Aaron Romm earned a Bachelor of Musical Arts degree at Vanderbilt University's Blair School of Music, where he studied with Allan Cox.  He completed his Master's and Doctoral degrees at the University of Illinois at Urbana-Champaign, where he studied with Ronald Romm, Dr. Jake Walburn, and Charles Daval.  Prior instructors include Carole Dawn Reinhardt, Bernard Adelstein, and Victor Mongillo.

Aaron Romm is a Warburton Performing Artist and Clinician.

Our Saturday, May 7 Outdoor Pops concert at the Orioles’ Ed Smith Stadium was rescheduled to Sunday, May 8 at 8:00 pm. If you were unable to attend the rescheduled performance, you may request a refund or donate your tickets.
Request Refund or Donate