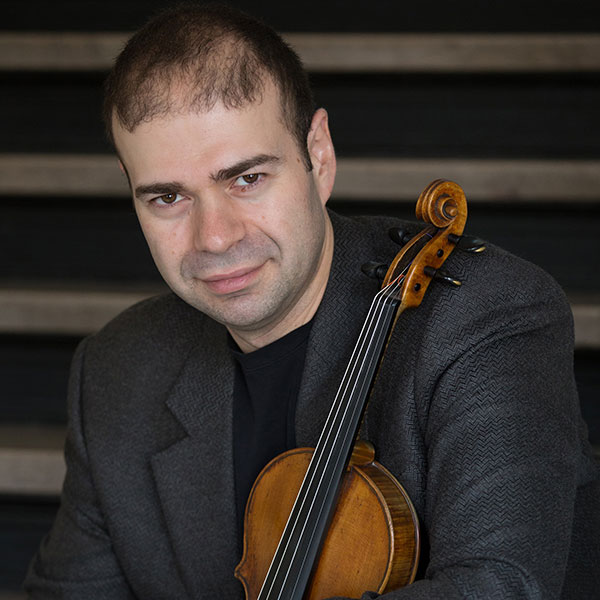 Hailed by critics as a “superior poet” (Vancouver Sun) and praised for his “heart and indomitable will” (Gramophone), Grigory Kalinovsky has performed at some of the world’s major venues, from all three stages of Carnegie Hall in New York to Musikhalle Grosser Saal in Hamburg. As a recitalist and avid chamber musician, he has appeared at numerous concert series and festivals, including the Asheville Chamber Music Series, Lyric Chamber Music Society of New York, Lucas Foss’s Festival at the Hamptons, Newport Music Festival, and Pavel Vernikov's festival, “Il Violino Magico” in Italy, collaborating with such renowned musicians as Pinchas Zukerman, Shmuel Ashkeniasi, Ralph Kirshbaum, Miriam Fried, James Buswell, Dora Schwarzberg, and Paul Coletti, among others.

A devoted educator, Prof. Kalinovsky joined the Jacobs School of Music faculty in the fall of 2013 and continues to teach at the Heifetz International Music Institute and IU Summer String Academy. Previously a faculty member at the Manhattan School of Music, he has taught at many summer music festivals, including Pinchas Zukerman’s Young Artists Program in Canada, Keshet Eilon Mastercourse in Israel, Bowdoin International Music Festival in Maine, Soesterberg International Music Festival in Holland, Summit Music Festival in New York, “Il Violino Magico” in Italy, and Manhattan in the Mountains, where he was also one of the founding artistic directors. His book “ViolinMind” on theory and technique of playing using different tuning systems, written in collaboration with famed cello professor Hans Jørgen Jensen, has been published by OvationPress in 2019.

Prof. Kalinovsky’s students have won top prizes at national and international competitions, including the Tibor Varga Youth Competition, Menuhin Young Artists Competition in England, Andrea Postacchini Young Violinists Competition in Italy, and Fischoff International Chamber Music Competition in Chicago, and have gone on to study at institutions such as Curtis, Colburn, Juilliard, Yale, New England Conservatory, Manhattan School of Music, and Indiana University, among others.

His recording with pianist Tatiana Goncharova featuring Shostakovich’s Violin Sonata and Twenty-Four Preludes transcribed for Violin and Piano by Dmitri Tziganov – with several of the transcriptions commissioned by Kalinovsky from the celebrated composer Lera Auerbach – was released by Centaur Records to great critical acclaim and hailed by the composer's son, conductor Maxim Shostakovich, as “a must-have for any Shostakovich music connoisseur.” The duo’s recording of the complete set of sonatas for violin and piano by Mieczysław Weinberg was released on Naxos label in 2017.

Kalinovsky started his music education with Tatiana Liberova in his native St. Petersburg, Russia. After coming to New York, he continued his studies with Pinchas Zukerman and Patinka Kopec at the Manhattan School of Music, where he served as a faculty member shortly after graduating and until his move to Indiana University.