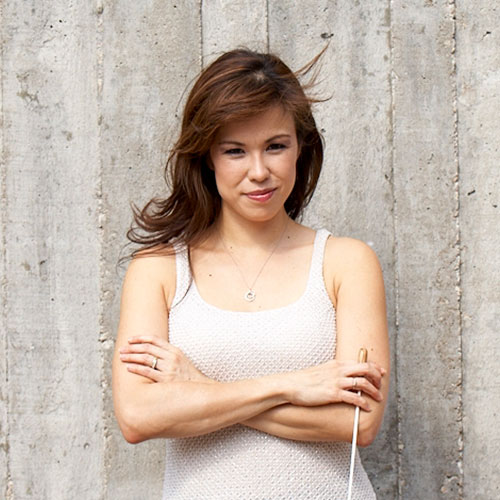 Noted in the New York Times as part of "a new wave of female conductors in their late 20's through early 40's", Sarah Hicks's versatile and vibrant musicianship has secured her place in "the next generation of up-and-coming American conductors". In October of 2009 she was named Principal Conductor, Live at Orchestra Hall of the Minnesota Orchestra; in addition to conducting most Pops and Special Presentations, she has been instrumental in creating new Pops productions while also heading the innovative classical series, "Inside the Classics". Hicks concurrently holds the positions of  Staff Conductor of the Curtis Institute of Music.  Throughout her career she has collaborated with diverse artists, from Jamie Laredo and Hilary Hahn to Josh Groban and Smokey Robinson; during the summer of 2011 she was on a two-month tour with Sting as conductor of the final leg of his Symphonicities Tour.  In June of 2012 she conducted the opening concert of the St. Petersburg International Economic Forum, and program featuring Dmitri Hvrostovsky, Sumi Jo and Jackie Evancho.

Ms. Hicks was invited to Japan by the New National Theatre Tokyo, where she acted as assistant conductor to a production of Mozart's Die Zauberflöte  and has performed Verdi's Aïda with the East Slovak State Opera Theater.  Her extensive work with the Curtis Opera Studio include performances of Poulenc's Dialogues des Carmelites  and numerous vocal concerts; she led the Opera Studio's production of Handel's Alcina  in 2005 and led the Minnesota Orchestra in a semi-staged production of Humperdinck's Hansel und Gretel  in 2009.

A committed proponent of the performance of new music, Ms. Hicks recently completed a Microcommission Project (the first of its kind) with the Minnesota Orchestra in which hundreds of people made microdonations to fund a major new work by composer Judd Greenstein.  She has led the Curtis Symphony Orchestra in readings, recordings and performances of contemporary works. Her recording project with the Vermont Symphony, "Triple Doubles", featuring music of Richard Danielpour and David Ludwig with Jaime Laredo and Sharon Robinson, soloists was recently released on the Bridge Label.  She has also conducted performances with Composers in the Shape of a Pear (Cleveland) and the Aspen Contemporary Ensemble.

Sarah Hicks was born in Tokyo, Japan and raised in Honolulu, HI.  Trained on both the piano and viola, she was a prizewinning pianist by her early teens.  She received her BA magna cum laude from Harvard University in composition; her AIDS Oratorio was premiered in May of 1993 and received a second performance at the Fogg Art Museum the following December.  She holds an Artists' Degree in conducting from the Curtis Institute of Music, where she studied with renowned pedagogue Otto-Werner Mueller.  Ms. Hicks's talents have been recognized with numerous prized and scholarships; she received the Thomas Hoopes Prize for composition and the Doris Cohen Levy Prize for conducting from Harvard University, and she was the recipient of the Helen F. Whitaker Fund Scholarship and a Presser Award during her time at Curtis.

In her spare time, Ms. Hicks enjoys running, yoga, her Papillon, cooking (and eating) with her husband, traveling and sketching.