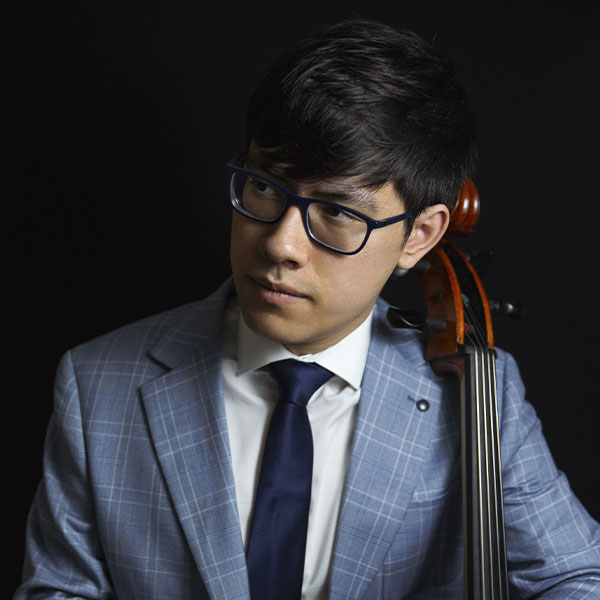 The first American in four decades and youngest musician ever to win First Prize at the International Tchaikovsky Competition Cello Division, Zlatomir Fung is poised to become one of the preeminent cellists of our time. Astounding audiences with his boundless virtuosity and exquisite sensitivity, the 22-year-old has already proven himself to be a star among the next generation of world-class musicians. A recipient of the Borletti-Buitoni Trust Fellowship 2022 and a 2020 Avery Fisher Career Grant, Fung's impeccable technique demonstrates a mastery of the canon and an exceptional insight into the depths of contemporary repertoire.

In the 2021-2022 season, Fung performs with orchestras and gives recitals in all corners of the world. Summer debuts include La Jolla Chamber Music Society in recital with Richard Fu, multiple programs at ChamberFest Cleveland, Bravo! Vail in a chamber music program with Joshua Bell and Shai Wosner, Aspen Music Festival in a performance of Tchaikovsky’s Variations on a Rococo Theme with the Aspen Festival Orchestra, and Rockport Chamber Music Festival in a recital with Dina Vainshtein. In the fall, he opens Ann Arbor Symphony’s season and appears twice with Iris Orchestra. He is presented by Harvard Musical Association, Philadelphia Chamber Music Society, Philharmonic Society of Orange County, and Thomasville Entertainment Foundation before making his Carnegie Hall Weill Recital debut with pianist Mishka Rushdie Momen in a program of Romantic-era classics. He returns to Philadelphia Chamber Music Society in January for two evenings with BalletX and the Calidore Quartet to give the Philadelphia premiere of a new work by Anna Clyne and appears with several orchestras including the Detroit, Kansas City and Greensboro Symphonies. He tours Italy, Russia, China, and Japan with orchestras and in recital.

In the 2020-2021 season, Fung made his Seattle Symphony debut in the orchestra’s 13th annual Celebrate Asia concert in addition to livestreams presented by University of Delaware, The Phillips Collection & Music Wooster, and Friends of Chamber Music, and many online masterclasses. In the 2019-2020 season, he returned to the Ann Arbor Symphony Orchestra and debuted with Asheville and Aiken Symphony Orchestras. He performed at Carnegie Hall’s Zankel Hall in a joint recital with fellow Tchaikovsky Competition winners in October, following a recital at Friends of Music in Sleepy Hollow, NY. Other recitals include Cold Spring Harbor Laboratory in New York, Wengler Center for the Arts at Pepperdine University in Malibu, Syrinx Concerts in Toronto, The Embassy Series in Washington DC, Salon de Virtuosi and Bulgarian Concert Evenings in New York City, Chamber on the Mountain in Ojai, and Evergreen Museum & Library in Baltimore. At the Artist Series of Sarasota, Fung performed the complete works for cello and piano by Beethoven. As a chamber musician, Fung performed around the world, opening the season with IMS Prussia Cove on tour to London’s Wigmore Hall, Cornwall, Cambridge, West Sussex, and Somerset. New York City chamber music engagements included the Aspect Foundation. During the summer of 2019, Fung performed at  Musique de Chambre à Giverny, a chamber music festival in northern France.

Of Bulgarian-Chinese heritage, Zlatomir Fung began playing cello at age three and earned fellowships at Ravinia's Steans Music Institute, Heifetz International Music Institute, MusicAlp, and the Aspen Music Festival and School. Fung studied at The Juilliard School under the tutelage of Richard Aaron and Timothy Eddy. Fung has been featured on NPR’s Performance Today and has appeared on From the Top six times. In addition to music, he enjoys cinema, reading, and blitz chess.