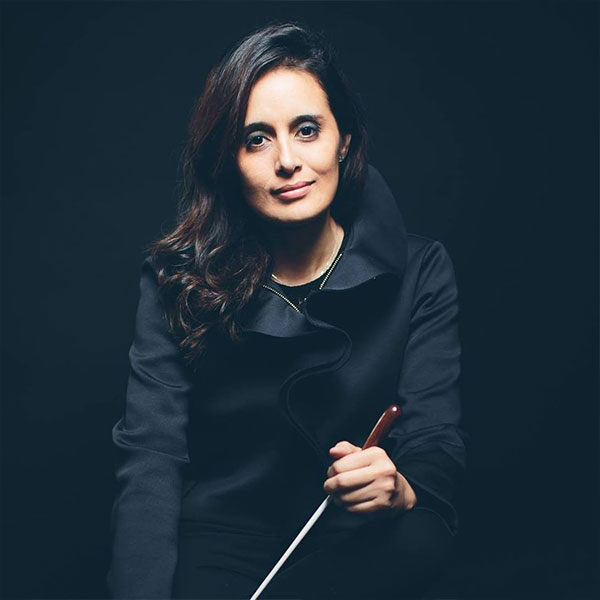 Lina González-Granados has recently been appointed Resident Conductor by the LA Opera, position to be held from July 2022 thru June 2025.

Praised for her "attention to orchestral colors" (OperaWire) and ability to create "lightning changes in tempo, meter, and effect" (Boston Musical Intelligencer), Colombian-American Lina González-Granados has distinguished herself nationally and internationally as a talented young conductor of symphonic and operatic repertoire. Her spirited interpretations of the orchestral repertoire, as well as her dedication to highlighting new and unknown works by Latin- American composers, have earned her international recognition, most recently as the recipient of the 2021 Sphinx Medal of Excellence, the Third Prize and ECHO Special Award (European Concert Hall Organization) of La Maestra Competition, and the 2020 and 2021 Solti Foundation US Career Assistance Award.

Lina was the winner of the Fourth Chicago Symphony Orchestra Sir Georg Solti International Conducting Competition, and became the new Solti Conducting Apprentice under the guidance of Maestro Riccardo Muti, beginning in February 2020 and continuing through June 2022. She has held positions as Conducting Fellow of the Philadelphia Orchestra and Seattle Symphony.

She will also lead the production of Il Barbiere di Siviglia at the Dallas Opera.

Lina is an active and fervent proponent for the inclusion and development of new works for chamber and large orchestra, especially music from Latin-American composers. She is the Artistic Director of Unitas Ensemble, a chamber orchestra she founded that performs the works of Latinx composers, and provides access to free community performances for underserved communities. Her work with Unitas has earned her numerous community awards, most recently a Spark Boston award from the City of Boston. She has also commissioned multiple World, North-American, and American premieres, as well as the creation and release of the Unitas Ensemble album “Estaciones”, recorded alongside the Latin Grammy-winning Cuarteto Latinoamericano.

Born and raised in Cali, Colombia, Lina made her conducting debut in 2008 with the Youth Orchestra of Bellas Artes in Cali. She holds a Master’s Degree in Conducting with Charles Peltz, a Graduate Diploma in Choral Conducting from New England Conservatory with Erica Washburn, and a Doctor of Musical Arts in Orchestral Conducting from Boston University. Her principal mentors include Marin Alsop, Bernard Haitink, Bramwell Tovey and Yannick Nézet- Séguin.