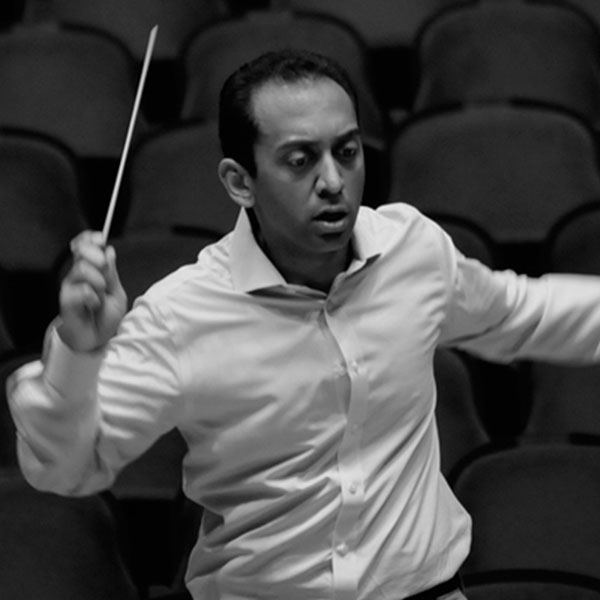 Internationally recognized for his deep musicianship and passionate communication, Sameer Patel is one of America's most exciting young conductors.

In the 2019-2020 season, Sameer begins his role as the Artistic Director of the Hot Springs Music Festival and continues as Associate Conductor of the Sun Valley Music Festival. He recently concluded an acclaimed tenure as Associate Conductor of the San Diego Symphony, where he reinvigorated the orchestra's programming and connection with its community. Upcoming engagements include conducting a production of Puccini's Tosca with Houston's Opera in the Heights, along with concert performances with the Detroit Symphony, Savannah Philharmonic, Chicago Sinfonietta, and the La Jolla Symphony. Recent appearances include the orchestras of Toronto, St. Louis, Detroit, New Jersey, Phoenix, Sacramento, La Jolla, Toledo, New Hampshire, Bozeman, Fresno, Knoxville, Pacific, Alabama, Naples, Reading, and Jacksonville, as well as the National Symphony in Washington, D.C, the Los Angeles Chamber Orchestra, and the Chicago Sinfonietta. Abroad, he has conducted acclaimed performances with the Orchestra Sinfonica di Sanremo, the Orchestra Giovanile Italiana, the Leipziger Sinfonieorchester, and others. With an unending enthusiasm for understanding the music of our time, Sameer has curated programs and has championed music by living composers such as Adam Schoenberg, Anna Clyne, Mason Bates, Ellen Reid, Hannah Lash, Tan Dun, and others.

Sameer's impressive work spans three continents and has led to recognition from the Solti Foundation U.S., which granted him three consecutive Career Assistance Awards and an Elizabeth Buccheri Opera Residency with North Carolina Opera. In 2016 he was recognized by Daniele Gatti as a top conductor at the Accademia Chigiana in Siena, Italy, which led to his acclaimed professional debut with the Orchestra Sinfonica di Sanremo. In 2013, Kurt Masur, the late Music Director of the New York Philharmonic, recognized Sameer's talents with a prize from the Felix Mendelssohn-Bartholdy Foundation, which allowed him to study with and assist Maestro Masur in his appearances with the Leipzig Gewandhaus Orchestra and the Finnish Radio Symphony Orchestra. That same year, Sameer was one of only six conductors selected by the League of American Orchestras for the Bruno Walter National Conductor Preview with the Jacksonville Symphony Orchestra, which led to subsequent, multiple engagements with that orchestra. In the early stages of his career he held conducting positions with the Chicago Sinfonietta and the Fort Wayne Philharmonic.

A graduate of the University of Michigan, Sameer furthered his training across Europe with some of the greatest conductors of our time, including Gianandrea Noseda, Daniele Gatti, the late Kurt Masur, Bernard Haitink, David Zinman, and Neeme and Paavo Järvi. Born and raised in Michigan, Sameer is an enthusiastic advocate for music education and in his spare time pursues his passions for literature, languages, traveling, history, and geopolitics. He makes his home in Southern California with his wife, Shannon, their three-year-old son, Devan, and their infant daughter, Veda.