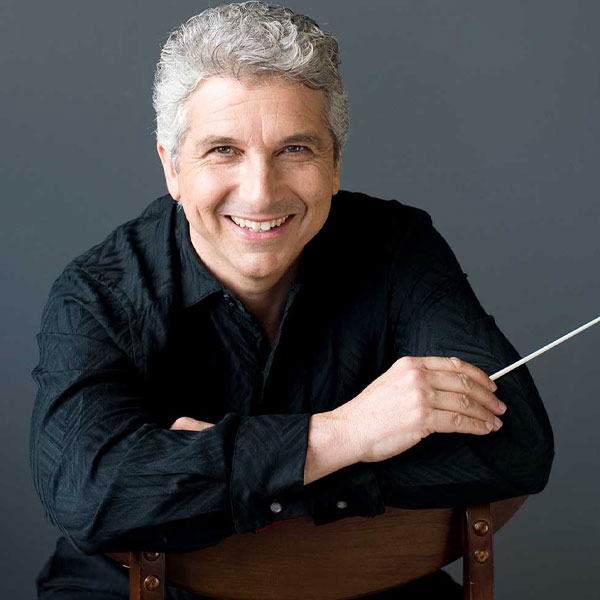 Peter Oundjian has been privileged to share his love of music with audiences for over five decades.

2017-18 marked Oundjian’s fourteenth and final season as Music Director of the Toronto Symphony Orchestra (TSO). His appointment in 2004 reinvigorated the orchestra with recordings, tours, and acclaimed innovative programming, as well as extensive audience growth. Under his leadership, the ensemble underwent a transformation that significantly strengthened its presence in the world. In 2017, he led the orchestra on a major tour of Israel and Europe, which included a residency at the Prague Spring International Music Festival and a performance at the famed Wiener Konzerthaus. In 2008 and 2011, the TSO played sold-out concerts at Carnegie Hall. Oundjian is now honoured by the TSO with the title of Conductor Emeritus.

From 2012 to 2018, Oundjian was also Music Director of the Royal Scottish National Orchestra (RSNO). Under his baton, the orchestra toured China, the USA, and across Europe. Together they recorded albums under Chandos and Sony, and presented Britten’s monumental War Requiem at the 2018 BBC Proms, a performance that will last as one of the most truly memorable experiences of his life.

Born in Toronto and raised in Surrey, England, Oundjian grew up performing frequently as a violinist and choral singer, highlighted by three recordings under the baton of Benjamin Britten. During his teenage years, Oundjian frequently played concertos, recitals, and chamber music throughout England. He attended the Royal College of Music in London where he was awarded the Tagore Gold Medal in 1975, presented to him by Queen Elizabeth The Queen Mother.

That same year, at the encouragement of Pinchas Zukerman, Oundjian entered the Juilliard School, where he studied with Ivan Galamian, Itzhak Perlman, and Dorothy DeLay. In 1980, Oundjian won First Prize in the Viña del Mar International Violin Competition, as well as the Pro Musicis Award in New York. In 1981, he joined the Tokyo String Quartet as the first violinist. Over the next 14 years, the group performed in concert halls and festivals in every corner of the world, and recorded over 35 albums, several of which received Grammy nominations. In 1995, Oundjian was forced to step away from the violin, having developed focal dystonia in his left hand.

Merely a month after stepping down from his post with the Tokyo String Quartet, Oundjian’s friend and mentor André Previn invited him to share the podium at the 50th Anniversary concert of the Caramoor International Music Festival. Oundjian had studied conducting while at the Juilliard School, and had taken part in an historic series of masterclasses with Herbert von Karajan.

At the age of 39, Oundjian turned his focus to reigniting his former passion for conducting. After several years of playing through the worsening condition in his left hand, making music from the podium was a liberating experience. He was excited to bring music to life with the sensitivities he had absorbed as a chamber musician: attention to detail, pure acoustic balance, and an understanding of how to harness and unleash music’s inherent spontaneity. To this day, his drive to create an immediate, vibrant emotional experience influences every step of his creative process, from crafting an interpretation, to fostering an engaging rehearsal environment, to every adrenaline-filled performance.

Oundjian has appeared at some of the great annual gatherings of music and music-lovers: the BBC Proms, the Edinburgh Festival, the Prague Spring Festival, and the Philadelphia Orchestra’s Mozart Festival, for which he was Artistic Director from 2003 to 2005. He has also made numerous appearances through his career with the LA Philharmonic, the Philadelphia Orchestra, the San Francisco Symphony, and the Pittsburgh, St. Louis, Baltimore, Atlanta, Chicago, and Boston Symphony Orchestras. On the global circuit, he has performed with the Sydney Symphony, Japan’s NHK Symphony Orchestra, the Royal Stockholm Philharmonic Orchestra, L’Orchestre Philharmonique de Radio France, Lucerne Symphony Orchestra and the Zürich Tonhalle.

Oundjian was Principal Guest Conductor of the Detroit Symphony Orchestra from 2006 to 2010 and Artistic Director of the Caramoor International Music Festival in New York from 1997 to 2007. He was also the Music Director of the Amsterdam Sinfonietta from 1998-2002.

Education has been as much of a joy and passion for Oundjian in his life as any other musical pursuit. He has always carried with him profound gratitude towards his own mentors, which include Yehudi Menuhin, Andre Previn, Dorothy DeLay, Robert Mann, Leon Fleisher, Itzhak Perlman, and Pinchas Zukerman. The impact of his own mentors on his musical life instilled in him a longing to inspire the next generations of musicians. At the age of 25, he became a visiting professor at the Yale School of Music, and has mentored young violinists, conductors, and chamber groups at Yale for 38 years. In 2016, he was appointed Principal Conductor of the Yale Philharmonia. He earned the university’s Sanford Medal for distinguished service to music in 2013, and also holds an Honorary Doctorate from the San Francisco Conservatory of Music.