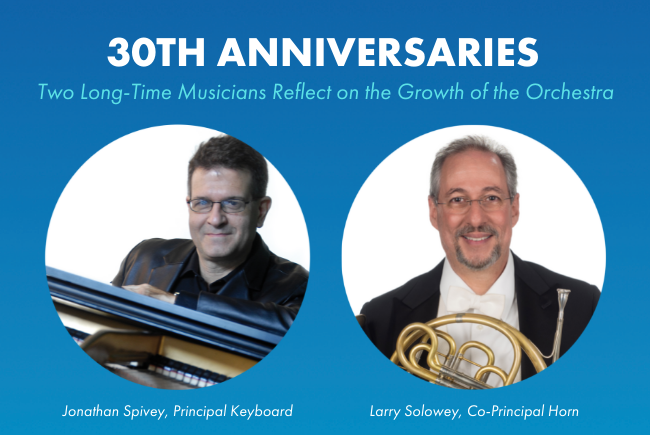 It was August of 1991 when 30-year-old pianist Jonathan Spivey began the drive from the State University of New York at Stony Brook toward balmy Sarasota. The owner of a freshly minted doctorate, he had piano music piled on the seats and snow skis tied to the roof as he headed south toward a new job as pianist for Florida West Coast Symphony (FWCS). (Sarasota Orchestra gained its new name in 2009.)

Hornist Larry Solowey and his then girlfriend (now wife) Roxane Frangie had been on the road in Europe with a touring production of West Side Story when a friend told them about an opening for Co-Principal Horn in FWCS. The West Side Story tour was taking a hiatus for a couple of months, and Larry decided to fly back to the States to take the audition. He won the position in the fall of 1991 and began almost immediately.

Larry and Jonathan are celebrating their 30th anniversaries with Sarasota Orchestra this season and shared with us some of their observations on how the Orchestra has grown during their tenures.

Perhaps most notably, they commented that the Orchestra they joined featured only 18 full time musicians. Many of the musicians in the 1991 FWCS were retirees from “northern” orchestras or local music teachers, working alongside a smattering of recent conservatory graduates like Larry and Jonathan. Orchestra rehearsals were held almost exclusively at night in order to accommodate the large number of musicians with “day jobs.”

Although the organization was small and relatively unknown outside of Sarasota, Jonathan and Larry were earning money playing music, and they both had hopes that the Orchestra would grow. Sarasota itself was then a far quieter town with almost no nightlife downtown, save the Golden Apple Dinner Theater housed next to the Opera House. Lakewood Ranch was a cow pasture and the only folks living east of I-75 were hardscrabble ranchers and alligators.

Fast-forward 30 years, and Sarasota Orchestra is widely considered among the finest regional orchestras in the country. With 48 full time “Core” and 28 contracted part time “Full Orchestra Musicians,” the organization has grown substantially from its community orchestra roots. Larry and Jonathan said they observed a series of commitments to raising the artistic bar ever higher during the music directorships of Paul Wolfe, Leif Bjaland, and Anu Tali. Both are excited to see what comes next with Bramwell Tovey.

Larry and Jonathan’s lives were similarly transformed. Although neither had expected in 1991 that they would be here for 30 years, both are grateful for the extraordinary opportunity to spend their careers in such an appreciative and supportive environment. Larry and Roxane married at Selby Gardens in 1994, shortly after Roxane joined the violin section of the Orchestra. Jonathan met timpanist Yoko Kita in FWCS and they married in 1995. Both couples raised their children here.

When asked what makes this place so special, both Jonathan and Larry noted that the amazing sense of family that exists among the orchestra’s musicians and staff is one of the unique and most fulfilling aspects of life here. The “Mom and Pop” Orchestra that each of them joined in 1991 has definitely grown up and now boasts a $10+ million-dollar annual budget, healthy endowment, and full staff, yet has never lost that family atmosphere that has always been at the center of life in the Orchestra, they said.

A version of this article appeared in the Fall/Winter 2021 Edition of SCORE, the official print newsletter of Sarasota Orchestra.