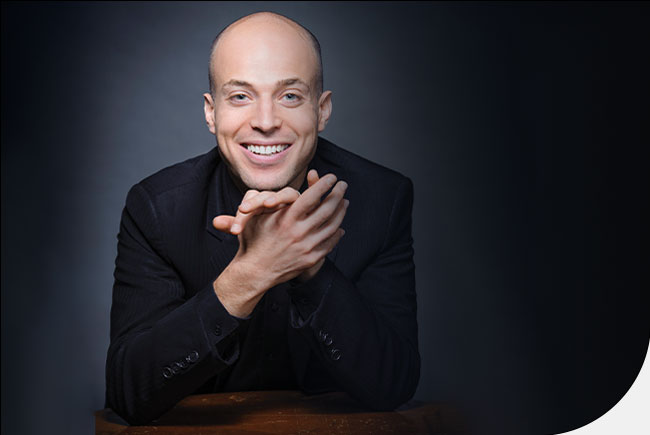 Orion Weiss is one of today's most sought-after symphonic soloists who's also world-renowned as a chamber musician--and he comes to Holley Hall on Sunday, November 13, for the second concert in Sarasota Orchestra's 2022-2023 Chamber Soirées. We had a chance to chat with Orion about a breadth of subjects, including the concert's delightfully contrasting program of Bach and Franck, how Orion coped with the loss of live performance during the 2020 lockdown, and how it feels today to be together again.

As a chamber musician, you have worked with exciting artists: violinists James Ehnes and Augustin Hadelich, pianist Shai Wosner, cellist Julie Albers, the Ariel and Pacifica Quartets -- just to name a few. But how often do you get the opportunity to collaborate with orchestras at the chamber music level? Is that unusual?

I wish it happened more often! It is a really special thing to get to do. At the same time, when I get to play a concerto with an orchestra, in a way, there's so much chamber music in that, too. But a true chamber music performance is a nice way to get to meet and play with musicians, to make music with the members of an orchestra in a way that you wouldn't normally get to do.

Let's talk about the music you'll be playing with Sarasota Orchestra musicians on this concert. From start to finish, César Franck's Piano Quintet is unbelievably intense the whole way through. Could you tell us about the demands on a musician's stamina that this piece requires?

Oh, definitely. It's a really unique piece in that way. It's obsessive and intense; even the soft moments are at such a high level of passion and wildness. It requires such an outpouring of emotion and focus. It's like Franck was trying to express such intense emotions and could only do it with music that is at a fever pitch the entire time. It almost doesn't even know how to end. It just ends on one note, as if it goes beyond what's expressible. Yes, physically it's a very demanding piece, because so often Franck builds enormous climaxes, and then he goes even farther above them right afterwards.The Bach is a really nice counterbalance on the program, because the Franck is so Romantic, so pianistic. Its broad writing utilizes the entire register of the piano, and the Trio Sonata from J.S. Bach's Musical Offering couldn't be more different. It almost feels like I'm working with just a left hand. I've played a lot of chamber music, but this is the first time I'm playing this Trio Sonata by Bach. It's not something that's programmed very often, so I think with this pairing we're going to have a concert of completely compelling, beautiful music.You know, the last concert I played, before everything was shut down in March of 2020, was in the Van Wezel Performing Arts Hall with the Pacifica Quartet. It's so nice now to be coming back to play a concert for people again.

That's incredible! Do you remember what you performed on that March 2020 concert?

We played the Dvořák Piano Quintet in A Major, which is one of my favorite pieces. It's got such a loving, autumnal feeling to it; I felt like, Oh, if I don't play any more concerts, at least I got the play this Dvořák quintet one final time.

So after that, how did you personally cope without live performances for, you know, what felt like an infinite stretch of time?

In a way, I felt so lucky to be a pianist. It reminded me of how quick my life will go before I could get to know all the music that I want to know. And so, I just immersed myself in learning repertoire. I learned some big pieces that I wasn't sure I ever would, or would have put off for at least a few more years. Bach's Goldberg Variations were one of my first the first things I learned, and I learned Rachmaninoff's nine Études-Tableaux, Op. 39. I learned the third Brahms sonata and a bunch of music by Schubert and Chopin -- so many pieces that I had just missed before. And it's changed me a little bit. I'm managing to keep learning now, even as I come back to work, which is nice. It's reminded me of how much there is to experience. Metaphorically, it's like I was sitting at home, watching the same TV shows over and over again, and I needed to get out of out of the house to explore the world a little bit. I couldn't literally travel, but I could go to my music shelf.

It sounds like lockdown actually became a very precious time for you.

It was really precious. The other thing that I did was spend time with my daughter. She's now ten, so she was seven then, and we got time together that we hadn't had before. I started a new relationship, and now I'm newly engaged. So there was a lot of growing in life and in happiness while we were stuck at home.

That's wonderful. So how has it felt to return to performing live, with other warm bodies in the room and onstage with you?

Seeing smiling faces again has been terrific. But also, think about how much sharing is part of what we do. When you're at home practicing, you have the beginning, the end, and the middle of the piece -- what's missing? But then, as soon as you're playing for people who are hungry for a musical experience and listening with all their attention -- for me, my own attention turns on; my focus and the level of what I can hear when I'm that attuned is so much higher. We need to be able to share it, and that's the whole point, I think: Music is a way of communicating with others in the past, but also a way of communicating between performer and audience, everybody having a shared experience in music.

Last question for you: Susan Platts, another guest artist on Sarasota Orchestra's chamber music series, is not only a brilliant mezzo-soprano but a published cookbook author as well. Do you have an avocation or something else about you unrelated to playing piano that surprises people to learn?

Well, all the really exciting secrets I have to keep as secret. [Laughs] I love to read. Right now I'm reading The Mayor of Casterbridge by Thomas Hardy, and I'm in the middle of The Lord of the Rings. I just read Shostakovich's Testimony memoirs. There are some questions about how much of it he actually wrote, but it's still a moving story. Now my evenings are filled with doing fourth-grade homework with my little daughter -- with her, not for her! Art is her favorite subject, and she loves drawing. Any lull in her day, and she wants to go right to making art.

Get Tickets for Chamber Soirée 2: Orion Weiss and Friends