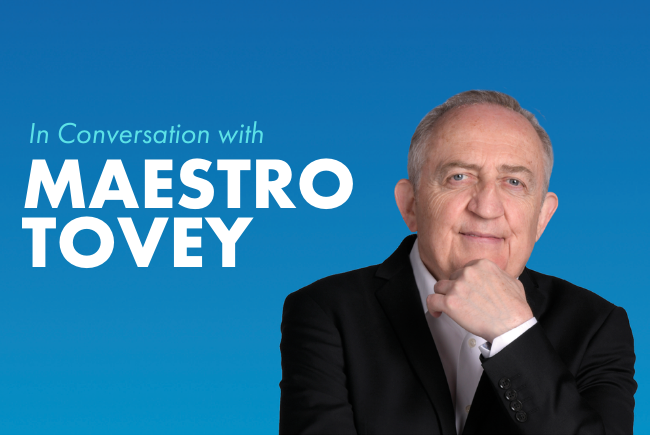 Q&A: In Conversation with Bramwell Tovey

After the October 30, 2021 inaugural concert with Bramwell Tovey, there was a question and answer segment moderated by Brian Hersh. Following are excerpts adapted from that discussion.

What excites you about Sarasota and Sarasota Orchestra?

The first thing I have to say about what excites me about Sarasota: I’ve lived in the weather in Canada. So that’s one thing. The second thing is that everybody’s so friendly here. The moment you get off the plane, everybody’s so helpful, collegial, and lovely. But the main reason I’m excited is this group of players. I know many of you know them personally. They’re great musicians, but they’re as nice people as they are great musicians. I have loved every moment on the podium with them.

How does being a musician and composer impact your work as a conductor?

I find that as a composer, you look at the score vertically, down the page. Then the conductor comes along and looks at it horizontally. Being a musician and composer does inform everything I do. It’s very helpful to be in touch with the act of how to create the sounds, the balances, the acoustics, and the horizontal rhythm of a piece.

How do you view the prospect of adding new music to the concert repertoire?

When I was a student at the Royal Academy of Music back in the early ‘70s, I was horrified as a young man that we were so structured and rigid about what constituted good music. In those days, Schoenberg and his musical descendants held sway. After the Second World War, classical music, by its very nature, had split into two fields. One was ongoing Romantic Expressionist music like that written by Bernstein, Copland, William Walton, all these kinds of composers. On the other side of it was music that felt a little bit like looking at your tax forms. It was interesting to look at and learn lessons from, but not much that you wanted to take with you. For me, contemporary music is important if it has vision. It’s important if it has something that can articulate about the kind of world that we live in, and that we aspire to. One of the great contemporary composers who’s only now having his works played by the Berlin Philharmonic and the Vienna Philharmonic, is, of course, the great John Williams. He’s not short of a bauble or two after his success in Hollywood, but he’s now being recognized in Europe as one of the world’s leading composers. The definition of “great music” has changed for contemporary music, and I think we don’t need to have that sort of frightened attitude towards it.

Can you tell us more about your interest in elevating composers and artists from historically underrepresented populations?

I’ve greatly enjoyed teaching the symphonies of Florence Price, conducting works by William Grant Still, and playing the gorgeous, tuneful music of Samuel Coleridge-Taylor. I’ve been getting to know the works of Jessie Montgomery, a phenomenal talent, and have gotten to work closely with indigenous composers and musicians in Canada. Still, I have found the pandemic to be a very instructive thing, because although I and many musicians had already been trying for some years to make a difference in this regard, I think there’s been a tremendous burst of energy behind underrepresented composers. I’m finding this incredibly stimulating, and I’ll tell you why: Music is a narrative, right? It’s like a storyboard inside us. We can read, we can talk, we can go outside and look at a pretty scene, but that inner storyboard sometimes gets addressed only when we hear music. Composers are seeking to articulate the inner narrative of what it is to be a human being, no matter what color you are, no matter your sexual orientation, politics, or anything else— none of that has any relevance. It’s all about who we are inside as human beings. And now there’s so much music being composed about that narrative.