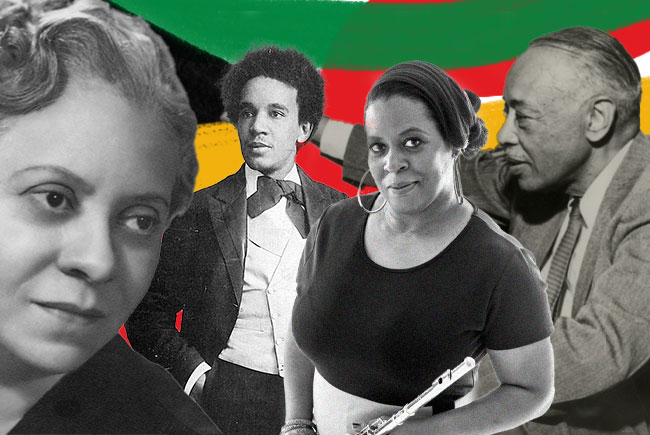 Sarasota Orchestra’s 2021-2022 concert season features several composers of color who made (and continue to make) many, magnificent contributions to classical music. Read on to learn more about these composers and find out when you can hear their works at an upcoming performance.

Florence Price was a classical pianist, organist, music educator, and composer remembered for being the first African-American woman to have her work performed by a major orchestra. Born Florence Beatrice Smith in Little Rock, AK, Price, her husband, and their two daughters left the segregated Deep South in 1927 and settled in Chicago.

In her new hometown Price’s composing career flourished as her music-making entwined with the energy of the Chicago Black Renaissance. She ended what had become a financially troubled and abusive marriage and continued to make ends meet with her music. In 1932, Price’s Symphony No 1 in E Minor won First Prize in the Wanamaker Competition, a contest for African-American composers, and was premiered by the Chicago Symphony Orchestra at the World’s Fair the following year.

In all, Price created more than 300 works, including three more symphonies and four concertos, as well as choral works and chamber music. Despite her prolific career, much of her music was forgotten until a rediscovery in 2009, when dozens of Price’s scores and manuscripts were found 70 miles south of Chicago in a derelict house that she had once used as a summer home. This lucky stroke saved a significant portion of Price’s musical catalog from vanishing into the historical ether.

Today, Black history is being made (and noticed) in the cultural mainstream, and Valerie Coleman is one of those inspiring figures in the classical music arena. While double-majoring in flute performance and composition at Boston University, Coleman nurtured a vision for a woodwind quintet that could elevate musicians and composers of color. She founded the Imani Winds in 1997, taking its name from the Swahili word for “faith.”

When the Imani Winds celebrated its 10th anniversary, Coleman told The Flutist Quarterly what it meant to realize her dream: “We could really do something special, we could be role models, we could really use our heritage to interpret music differently. We can go out into the communities and show people that African-American and Latino musicians are not aliens.”

Since founding the Imani Winds, Coleman’s list of accolades has established her as a distinguished artist of the 21st century. In 2002, Coleman’s signature work for wind quintet, Umoja, ranked on Chamber Music America’s list of the “Top 101 Great American Works.” The Imani Winds’ first album release on a major label, The Classical Underground, received a Grammy nomination in 2006. And in 2019, Coleman made headlines when the Philadelphia Orchestra programmed Coleman’s symphonic arrangement of Umoja–the orchestra’s very first performance of music written by a living African-American woman.

When history-making is defined by “firsts,” the classical music legacy of William Grant Still stands as one of the greatest. In the Rochester Orchestra’s 1931 premiere of his Symphony No. 1, titled the “Afro-American Symphony,” Still became the first African-American composer to have their music performed by a major orchestra. With its harmonic and rhythmic impressions of the blues, Still’s First Symphony was the most widely-played symphony written by any American until 1950!

Still moved to the West Coast and was the first African-American man to conduct a major symphony orchestra when he stepped onto the Los Angeles Philharmonic’s podium at the Hollywood Bowl in 1936–conducting a program that included his own music, no less. He later broke the Deep South’s conducting color barrier, leading the New Orleans Philharmonic in 1955.

Still was also a prolific operatic composer, contributing a total of nine operas to the repertoire. The New York City Opera performed its first American opera–and the first opera by a Black composer to be staged by a major opera company–with Still’s Troubled Island in 1949. And in 1981, Still’s A Bayou Legend was the first by an African-American composer to be performed on national television.